How to Identify and Solve Clock Skew Problems with NTP

How to Identify and Solve Clock Skew Problems with NTP

Having an accurate time source in a Windows environment is important for several reasons, including:

In this article, we will discuss the main reasons around clock/time skew issues when you are making use of our AEG solution. The reasons are:

A simple way to test if a client is receiving accurate time information from the time source in your domain is to browse to a public website that hosts a time service, such as a World Time Server. Then, you can compare the time shown on the website against the time show on your computer. If the time on the local computer is nearly the same as the time on the website, you can assume that your time source is accurately delivering information to your device(s). Now you need to dive deep to determine if this time source is NTP-based or not.

Check if the Windows Time Service is running

This will allow you to know if you the time service is running on your machine. You need to go to click Start Menu, type Services, click Services. This will open the Services window, then you will need to scroll down until you find the Windows Time service. Make sure that the startup type is set to Automatic, and the service status is Running, as shown in the following figure: 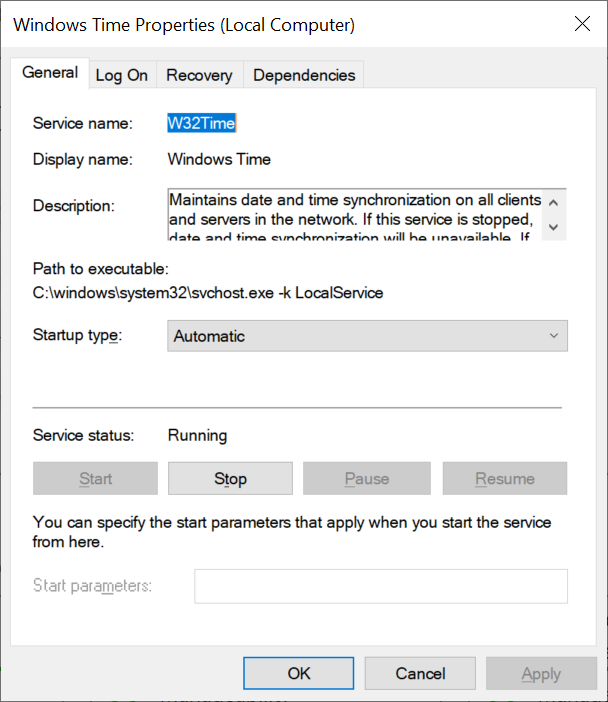 The NTP service and settings are determined by the Windows Time Service, also known was W32Time Service. There are some useful commands that you can use to determine whether your computer is correctly configured to receive time information via NTP or not. Here we offer one example, open a command prompt as administrator and run the command:
w32tm /query /status 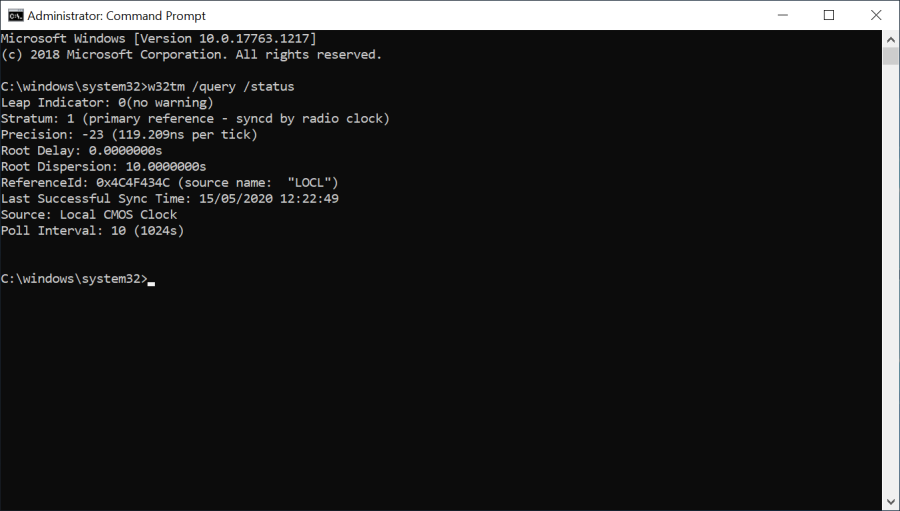 In the previous example, we can observe at least 4 parameters of interest:

You can see how the computer is using the local CMOS clock. The problem with this time source is that it is linked to an internal clock that depends on the CMOS battery. If this battery loses its power, which will happen eventually, the time will not be provided accurately.

Another good source of information that you can use to understand your current time service settings is the following command:
w32tm /query /configuration 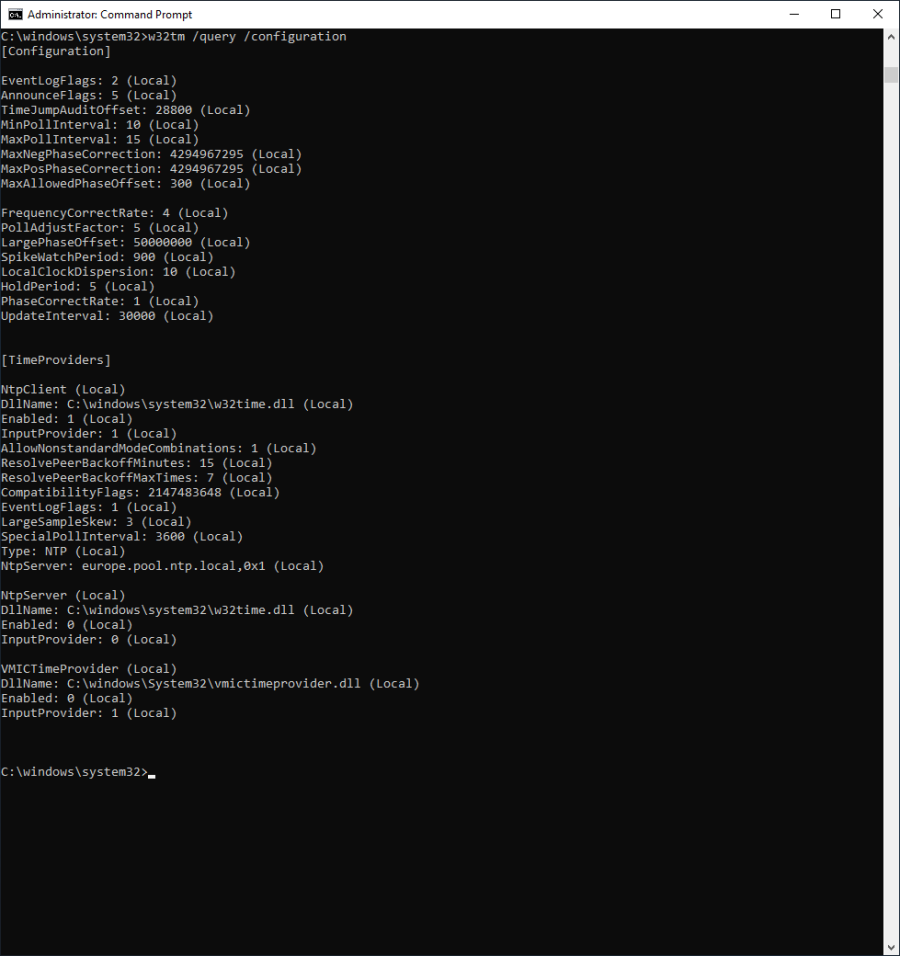 The command outputs are extensive, but the section about time providers can help you understand which time sources are configured in your device. In the previous example:

Also, best practices will tell you that you should configure NTP clients to contact the best time provider for your domain instead of using a publicly accessible NTP server. In this sense, your domain NTP server would be a domain controller that has been selected for the role of the NTP server. Furthermore, depending on the hierarchy, you could have several NTP servers in your domain, these NTP servers would obtain the time information from your Primary Domain Controller (PDC). Finally, the PDC would connect to the publicly accessible time source for accurate time updates. In an Active Directory environment, the hierarchy would look like the one shown in the following figure: 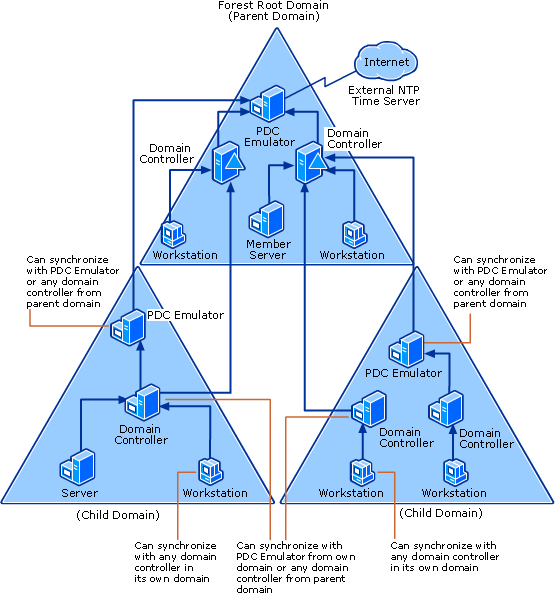 Configure a Computer to Sync with the Domain Time Source

For this, you need to run a few commands on the NTP client machine or server, and it will automatically synchronize its time information to the most reliable source in your domain:

After running these commands, you will get the following output: 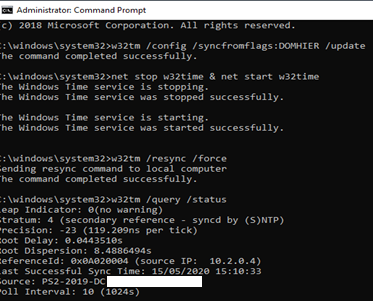 Now, you can see that Stratum has changed to 4. This means there are 3 other time sources above this client machine, which makes sense because one of them is the domain controller, PS2-2019-DC. The time source has changed from "Local CMOS Clock" to "PS2-2019-DC". For security reasons, we do not show the FQDN.

If your environment allows for it, you can disable the Hyper-V Time Sync Service from providing samples to the W32TM service. If you do so, W32TM will get updates only from its domain time source as configured above. To disable the Hyper-V Time Sync Service, run the following command from an elevated command prompt:
reg add HKLM\SYSTEM\CurrentControlSet\Services\W32Time\TimeProviders\VMICTimeProvider /v Enabled /t reg_dword /d 0

The following tests from the section Identifying Issues in NTP Clients can be performed in your NTP servers too:

Possible outcomes for the previous tests:

There are several places where you can find the NTP settings on your server. We will cover some of the most important for you to verify on your environment.

W32Time parameters are stored in the registry location:
HKEY_LOCAL_MACHINE\SYSTEM\CurrentControlSet\Services\W32Time\Parameters

Two parameters that you should double check are NtpServer and Type:

W32Time time providers are stored in the registry location:
HKEY_LOCAL_MACHINE\SYSTEM\CurrentControlSet\Services\W32Time\TimeProviders

There are three sub-folders, and these contain individual information on each of time providers:

If your environment allows for it, you can disable the Hyper-V Time Sync Service from providing samples to the W32TM service. If you do so, W32TM will get updates only from its domain time source as configured above. To disable the Hyper-V Time Sync Service, run the following command from an elevated command prompt:
reg add HKLM\SYSTEM\CurrentControlSet\Services\W32Time\TimeProviders\VMICTimeProvider /v Enabled /t reg_dword /d 0

Configure a PDC to Sync with an External NTP Server

For this, first you need to find a public NTP server that is close to you. You can check the following URL to find it:
http://support.ntp.org/bin/view/Servers/WebHome

NOTE: There are several other publicly available sources, so make sure you choose the one that is more convenient to you.

When you choose the public NTP time reference, run the following commands on the PDC:

You can then run the following two commands to verify the changes were applied correctly:

Configure a DC to Sync with the PDC

To configure additional DCs to sync with the PDC to obtain NTP information, you need to execute the following commands:

AEG: How to Enable Advanced Logging for AEG Server

This article will guide you through enabling AEG’s advanced logging feature. If this is not the solution you are looking for, please search for the solution in the search bar above. Note: This support article applies to AEG version 5.x and below. Also, when facing issues to enroll for Certificates, our support staff may require more information to determine the root cause of the problem.

AEG: How to Create and Link a GPO in Active Directory

This article will walk you through on how to create and link a Group Policy in Active Directory. Creating a GPO is a fairly simple task, so long as you know what settings you need to change, and how to apply it to the endpoints you are trying to affect.

Scan your endpoints to locate all of your Certificates.

Check your certificate installation for SSL issues and vulnerabilities.

If you are an Atlas portal user, please submit request to support-atlas@globalsign.com.
Contact Us
close